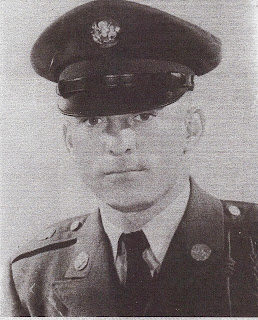 Sgt. James Lee Haynes, circa 1963
Vital Stats:
Race/ethnicity: Caucasian     Gender: M    Age: 32 years    DOB: 10 Aug 1931   Hair: N/A
Eyes: N/A    Height: N/A   Weight: N/A
Circumstances of disappearance:
James Lee Haynes disappeared on 7 Dec 1963 while hitchiking to his parent's home in Saulsville, WV. He was in the area intending to visit relatives for Christmas. He never arrived at his parent's home and has not been seen or heard from since.
Haynes was an army sergeant who had recently completed a tour of duty in Germany and was living in Baltimore, Maryland with his wife, Theta. Theta stayed in Baltimore with her children, while James travelled to West Virginia. She stated that James was carrying Christmas packages with him when he vanished.
Police believe that Haynes was involved in an altercation with three men at a local tavern earlier that day. Afterwards, the men followed Haynes from the tavern and ran him down as he walked along the road.  The suspects, unsure if Haynes was dead, backed their car over him again as he lay on the road. They put Haynes' body in the trunk of their vehicle at the scene in Raleigh County, then drove across the county line to Wyoming County. They buried Haynes in a large hollow on Bolt Mountain and nailed his dog tags to a tree. Searches of the area turned up Haynes dog tags, his wallet, and some bloody rags in a hollow tree stump, but his body was never recovered. Police stated that area was too large and the terrain too rough for a more thorough search.
In 1971, William Lundy Trump was arrested in connection with Haynes' disappearance, but a lack of evidence eventually led to his release. James Paul Cozort, who was living in Oregon in 1971, was also questioned, but was never formally charged. The other suspect, James Floyd Cox was missing at the time of Trump's arrest and was never located by police. These suspects never admitted to involvement in Haynes' disappearance, but allegedly boasted to others about their crime.
Police conducted more than 150 interviews in their search for clues, but were not able to attain enough information for a conviction.
Theta Haynes, James' widow, stated that the US Army Criminal Investigation Division also investigated, but came up with nothing. Sgt. Haynes was declared deceased one year after his disappearance.
Some have speculated that Haynes may have fallen victim to the "Mad Butcher of Fayette County". Five other men were reported missing in the area between July of 1962 and Haynes disappearance in December of 1963.
On December 7, 1963, the same day that Haynes went missing, a dismembered body was discovered in a clearing 6 miles south of Pineville, on State Route 16. The victim was a white male, who had been deceased for some time at the time of discovery. The body was badly dismembered, but not significantly decomposed. The victims arms, legs and head had been removed and the torso cut in half. The lower part of the torso was wrapped in canvas which was tied together with mine explosive wire. Police believed the victim may have been Shirley Arthur, but were not certain. Shirley Arthur was an enlisted Navy man who was reported missing in October of 1963. Arthur was also last seen hitchiking near Pineville. The body was buried at Still Run in a grave marked 'unidentified male A' and no arrests have been made in connection with the slaying.
The partial remains of two other bodies were also discovered between 1962 and 1963. To date, only one of the bodies has been positively identified.
On April 9, 1963, bloody clothing riddled with stab marks, was discovered discarded on a roadside in the area around Oakhill.
Police have not been able to confirm that a connection exists between the six missing men and the identity of the "Mad Butcher", if he ever existed, remains a mystery. The disappearances of James Lee Haynes and the 5 other missing men of Oakhill remain unsolved.

junkgrrl
The purpose of this blog is to help bring attention to cases of missing and unidentified persons. Most of the cases profiled are cold cases (more than a year old). Posted information may come from a variety of sources, most of them internet-based. It is my intention to provide as much information as possible about the cases featured here. I try to verify all information before posting, but mistakes are definitely possible. If you notice any incorrect information, feel free to email me and I will revise it. Any sources used will be cited at the end of each post--no plagiarism is intended.